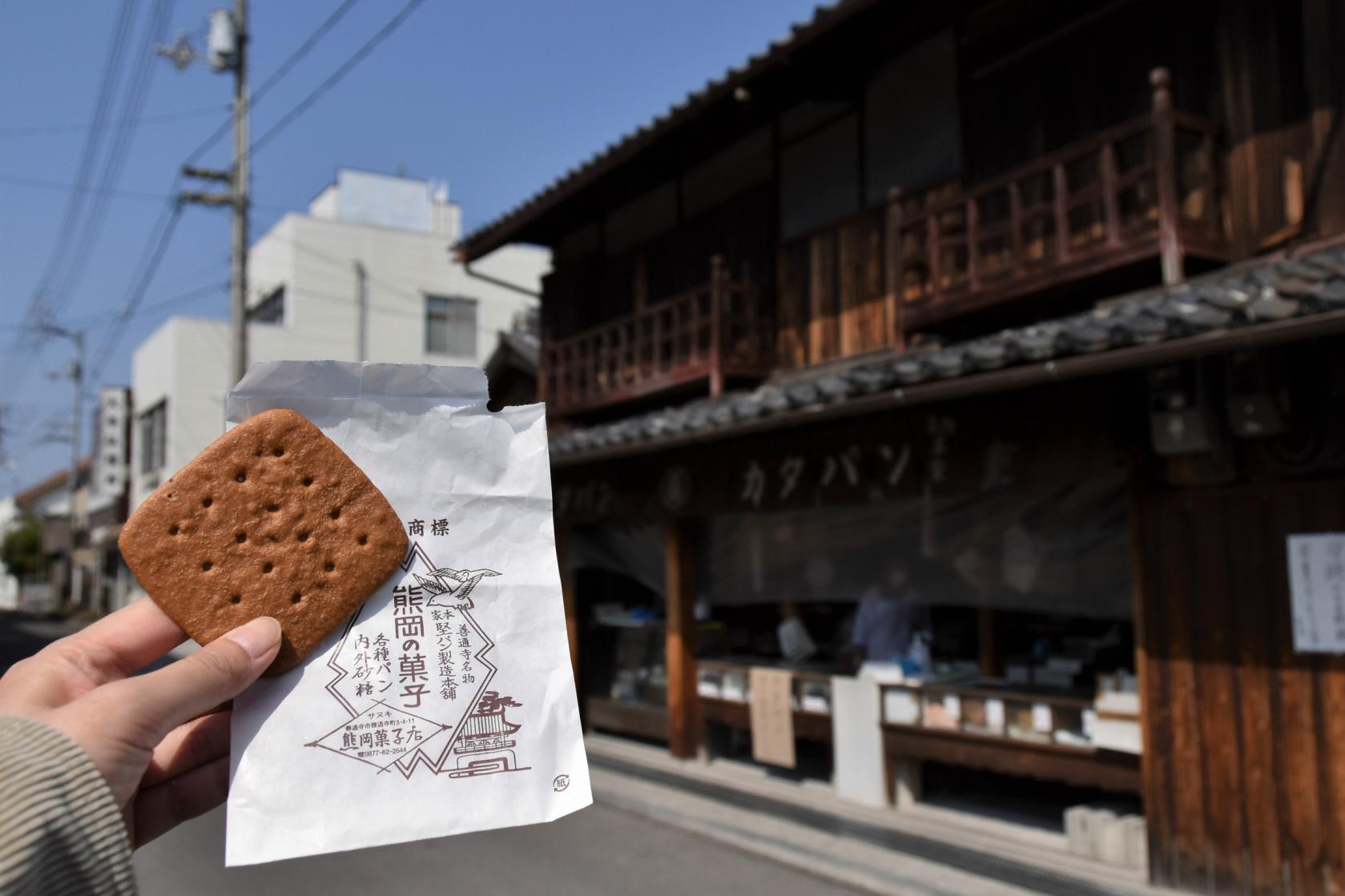 A Wagashi Lover's Guide to Sweets in Kagawa

Indulge your sweet tooth and awaken your inner "wagashi lover" with this special selection of traditional treats from Kagawa.

Before moving to Japan, I was never fond of sweets. I could handle birthday cake once a year, but even then, I would do everything I could to avoid the corner piece garnished with brightly colored flowers sculpted in icing. Cupcakes, chocolate bars, fudge brownies, cookies-all way too sweet for my taste. Then I came to Japan, and with my first bite of daifuku, (soft, chewy rice cake filled with sweet bean paste), my attitude toward sugary treats was completely turned around, and I became a die-hard fan of wagashi.

Wagashi are traditional Japanese sweets meticulously handcrafted with healthy ingredients like glutinous rice, adzuki beans, sweet potato, toasted soy bean flour and all kinds of seasonal fruits. Yes they contain sugar, but compared to the shocking sweetness of some western treats, wagashi are sweetened just enough to enhance the natural flavor of the ingredients. Besides deliciousness, Japanese sweets are steeped in tradition, and offer insights into the history and culture of the region where they are produced.

In fact, Kagawa is a wagashi lover's paradise with a plethora of sweets to choose from in all different flavors and textures, shapes and sizes. Each one has a story to tell, whether it's showcasing a homegrown ingredient or carrying on a local tradition. As hard as it is, I've narrowed down my list of favorites to three that will each give you a taste of the region and satisfy your sweet tooth.

Warabimochi is a summertime snack with a jelly-like consistency made from bracken starch, sugar and water, which is often covered with a generous dusting of kinako, roasted soy bean flour. Although warabimochi is popular all over Japan, the warabimochi produced by Kanesue Sweet Shop in Takamatsu City uses a blend of sugars unique to Kagawa for a depth of flavor you can't experience anywhere else.

I had my first taste of warabimochi at one of Kanesue's branch shops conveniently located in Takamatsu Station. The clerk kindly fished through the bright yellow kinako flour with a bamboo spear and pierced a piece of warabimochi for me to try. Not knowing what to expect, I tentatively placed the jiggling warabimochi on my tongue, and savored the toasted, nutty flavor of kinako flour before taking a bite. Pressing the warabimochi between my teeth, I was struck by its gelatinous consistency, which is not solid and not liquid, but something in between. I bit down slowly until the warabimochi split in two, and that's when the burst of sweet flavor coupled with a refreshingly cold sensation hit me. At that moment, the sweetness of the chilled warabimochi blended with the savoriness of the kinako flour for a perfectly balanced taste that left me hungry for more.

Kanesue's warabimochi is unique because it is sweetened with a blend of Wasanbon Sugar and "Rare Sugar Sweet" syrup, which are both specialty products of Kagawa. Wasanbon is an extremely fine, melt-in-your-mouth sugar that has been traditionally made in Kagawa since the Edo period (1603-1868). Rare Sugar Sweet, on the other hand, was developed by a research team from Kagawa University using naturally occurring rare sugars that are known for having numerous health benefits. The smooth, mellow sweetness of Wasanbon is combined with the crisp, clean flavor of Rare Sugar Sweet to give Kanesue's warabimochi its signature taste. It's a collaboration of tradition and technological innovation that you'll only find in Kagawa.

Located in Zentsuji City on the west side of Kagawa, Kumaoka Sweets Shop is incredibly popular with locals and tourists alike for its Katapan-literally "hard bread". Your mind may conjure up images of crunchy croutons or French biscotti, but trust me, Katapan takes the concept of "hard bread" to a whole new level.

Katapan comes in three varieties, and while they are all handcrafted with simple ingredients like flour, sugar, and a delicate ginger flavored glaze, I recommend Ishipan for the full Katapan experience. Ishipan, which translates to "rock bread", fits in the palm of your hand and is shaped like a stone with rough edges. Pop it in your mouth and you'll be pleasantly surprised by the spicy sweet ginger icing that will tempt you to take a bite down. But be warned! Ishipan is literally "as hard as a rock" and it is virtually impossible to bite into it on the first try. Instead, I recommend rolling Ishipan around on the tongue for a good two minutes until the ginger icing all but dissolves away before making any attempt to bite it. Once you do make a successful bite, your taste buds will be soothed with the mellow flavor of sweet molasses, a welcome contrast to the bright tones of the ginger icing.

The first Katapan was baked in 1896 when the owner of Kumaoka Sweets Shop was commissioned by the Japanese army to create a filling snack with a long shelf life for soldiers in the field. Although the recipe for Katapan has not changed after all these years, it has evolved from its origins as a snack for soldiers into a well-loved sweet attracting long lines of fans to Kumaoka Sweets Shop. Katapan may be slow to eat, but it's quick to sell out, so make sure to get in line early for a chance to try this challenging, yet delicious treat.

Produced by Hakueido Sweets Shop in Kan-onji City, located on the border of Kagawa and Ehime Prefecture, Kan-onji Manju is an innovative twist on a traditional Japanese confection that will leave a lasting impression with its fusion of flavors from east and west.

Traditionally, manju are small, round sweets filled with red bean paste and covered in a crust made of wheat, rice or barley flour baked to a toasty brown. Kan-onji Manju is not at all what you'd expect from manju, however. For starters, it's square, not round, with a golden crust that's surprisingly moist and dense to the touch. Splitting it in two, you'll be surprised to see not red, but white bean paste blended with egg to create a pale yellow filling that flows seamlessly into the crust. Taking a bite, the first flavor to register is butter-rich, creamy butter that will bring back memories of scones and shortbread. Just like shortbread, Kan-onji Manju practically melts in your mouth, and has a creamy, almost cheesecake-like consistency.

Kan-onji Manju was first created in the 1960s as a signature sweet to promote Kan-onji City to the rest of Japan. At that time, butter cake was becoming popular in Japan, but it was still very rare to use Western ingredients, such as butter, to create traditional Japanese sweets. However, Kan-onji Manju beautifully executes this combination of flavors with its white bean paste filling enveloped in a buttery crust that continues to surprise and delight wagashi lovers today. Despite my reservations towards sugary cakes and cookies, it's the nostalgic buttery flavor of Kan-onji Manju that makes it one of my all-time favorite Kagawa confections.

From One Wagashi Lover to Another

Red bean paste and pounded sticky rice. With just two, ephemerally sweet ingredients, wagashi opened my eyes to a flavor palette I had never experienced before, expanding my concept of "sweets" beyond the western confections I grew up with. With wagashi from Kagawa, not only can you experience new tastes and textures, but with a little research, you can learn about the history and traditions of the region as well. These are my favorites, but there are so many more Kagawa treats out there waiting to be discovered. What better way to immerse yourself in the culture of Kagawa than to indulge your sweet tooth and stop by a local sweet shop for a taste experience you won't soon forget?