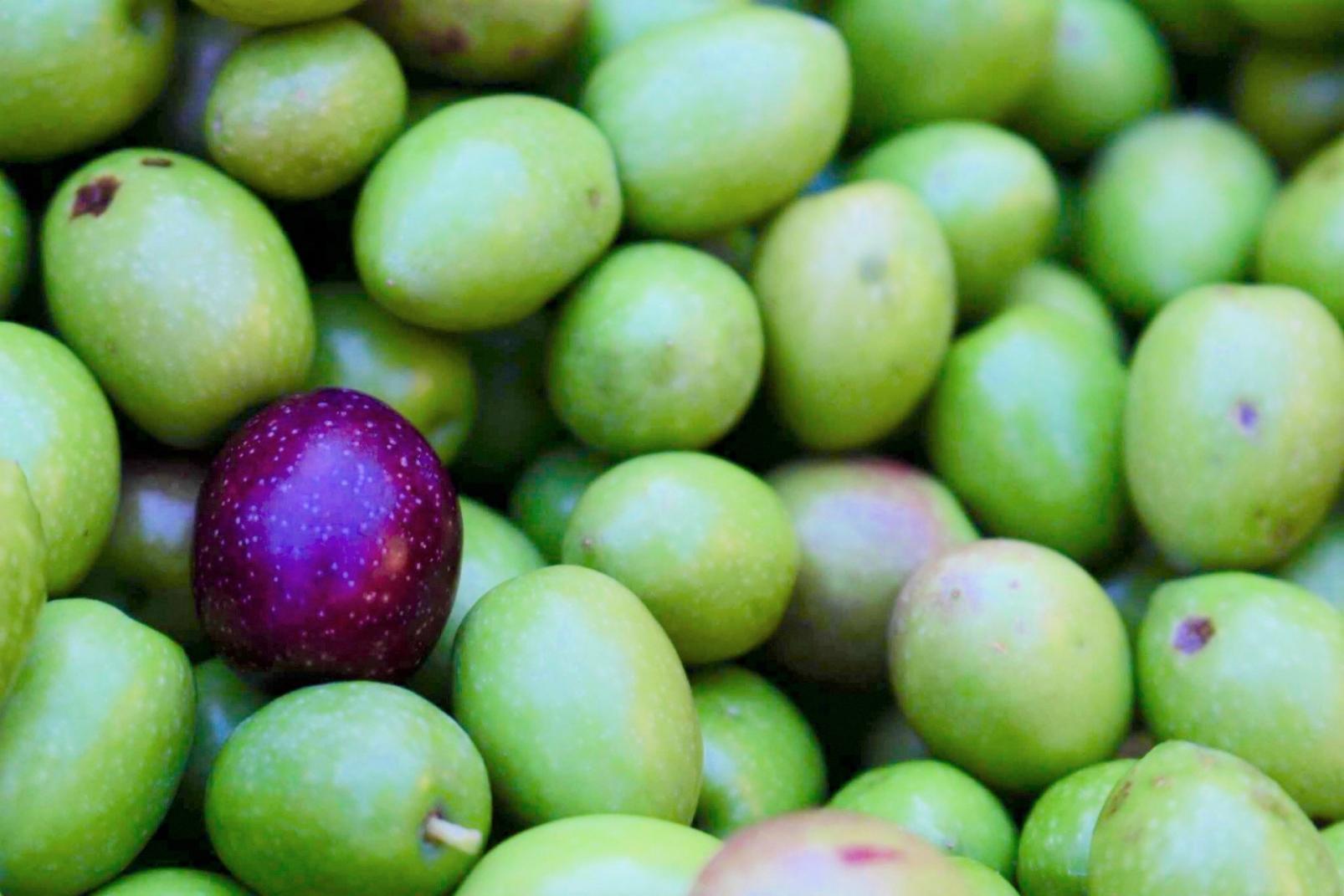 A Culinary Treasure Chest ・Experience the Flavors of Shodoshima Island

The three most famous products from Shodoshima Island are soy sauce, somen noodles and olives. When it comes to soy sauce, there’s “Soy Sauce Village”, which has become an important sightseeing destination in Kagawa. Here you’ll find rows of soy sauce breweries and tsukudani factories, where foods marinated in soy sauce are produced. You can even take a tour of breweries that have been producing naturally brewed soy sauce for over one hundred years. As for olives, Shodoshima currently produces 90% of all the olives grown in Japan. With beautiful views of olive orchards and the ocean, Shodoshima is described as having spectacular, Mediterranean-like scenery.

Shodoshima is the second-largest island in the Seto Inland Sea and has a population of just under 30,000. It benefits from a relatively warm and dry climate and clean groundwater. These weather conditions, along with Shodoshima’s location in the eastern part of the sea, near its busiest shipping lanes and the mercantile city of Osaka, historically contributed to making the island a major food producer. The comparatively calm Inland Sea has been crucial in trade since ancient times, connecting Osaka with Kyushu as well as with faraway lands including the Korean Peninsula and China.

Three of Shodoshima’s most notable products are soy sauce, thin wheat noodles called somen, and olives. The soy sauce and somen industries have their origins in salt production, which flourished on the island in medieval times. During the Edo period (1603–1867), however, the salt industry on Shodoshima declined due to overproduction in other regions, collapsing demand. The islanders decided to pursue alternative uses for their salt, which became an ingredient in soy sauce and wheat noodles. As both products were made from early on in the Osaka region—soy sauce in Wakayama and somen in Nara—their adoption on Shodoshima was hardly surprising. The island’s beneficial position in the Inland Sea trade made it easy to source ingredients such as soybeans and wheat from western Japan, and the proximity to Osaka meant that demand never dried up.

Olive trees were first planted on Shodoshima in the Meiji era (1868–1912), when the Japanese government chose the island as a test site for growing imported crops because of the presumed suitability of the local climate. This decision proved successful, and Shodoshima eventually became known as the olive capital of Japan. Olive plantations cover much of the island’s hillsides and, along with the sea beneath, make for a scenic landscape that is sometimes described as Mediterranean.

The production of soy sauce on Shodoshima began in the latter half of the Edo period (1603–1867), when a nationwide oversupply of salt forced local producers to pursue alternative means of subsistence. The industry experienced its greatest period of prosperity around the turn of the twentieth century, when up to 400 soy sauce breweries operated on the island. About 20 of these remain in business today. Most of the breweries are located in an area called Hishio no Sato, where the unmistakable aroma of soy sauce wafts over the neighborhood. In addition to selling their product directly to customers, some of the breweries operate small museums and cafes. Guided tours of the facilities are also available.

Shodoshima soy sauce is fermented in wooden barrels called koga, in which the microbes that give the product its distinctive taste live. Though most factories elsewhere now make their soy sauce in stainless steel tanks, the brewers of Shodoshima have kept to their koga, of which there are about 1,000 on the island. That is thought to be around half of all such barrels still in use throughout Japan. Soy sauce is used extensively in Japanese cooking, including in the making of tsukudani, which is small pieces of seaweed, fish, or vegetables simmered in soy sauce, sugar, and mirin (sweet cooking wine). A popular condiment often eaten with rice, tsukudani is made by a number of local companies and is widely available on the island.

・Shoyu Senbei (soy sauce flavored rice crackers): You won't be able to stop once you take one bite of these flavorful fried crackers made with Shodoshima soy sauce.
・Soy Sauce Soft Serve Ice Cream: This popular treat blends soft serve ice cream with rich-tasting Shodoshima soy sauce. The taste is beyond imagination!
・Tsukudani: Tsukudani is a sweet and salty condiment made by stewing small fish, seaweed or other ingredients in soy sauce and sugar. It's great when eaten with white rice!

Shodoshima Somen: Noodles in the Wind

Somen are thin wheat noodles considered a specialty of summer, when they are typically eaten cold, dipped in savory sauce. According to local lore, somen first arrived on Shodoshima in 1598, when an islander returning from a pilgrimage to Ise Grand Shrine (in present-day Mie Prefecture) brought with him noodle-making techniques acquired in the Miwa area of what is now Nara Prefecture. Though usually enjoyed in summer, somen are traditionally made in winter, when the freshly cut and pulled noodles, several meters long, are dried on racks under the open sky, in the cold wind blowing in from the Seto Inland Sea. Noodle-making began as a supplementary source of income for local farmers, who had time on their hands outside of the growing season, and developed into an industry in its own right during the Meiji era (1868–1912). There are currently some 150 somen factories on Shodoshima, where the local noodle-makers’ union stipulates that its members must use sesame oil (rather than the more common rapeseed oil) in the production process. This measure was taken to support the island’s sesame oil business, which developed alongside the somen industry and retains a nationwide presence. 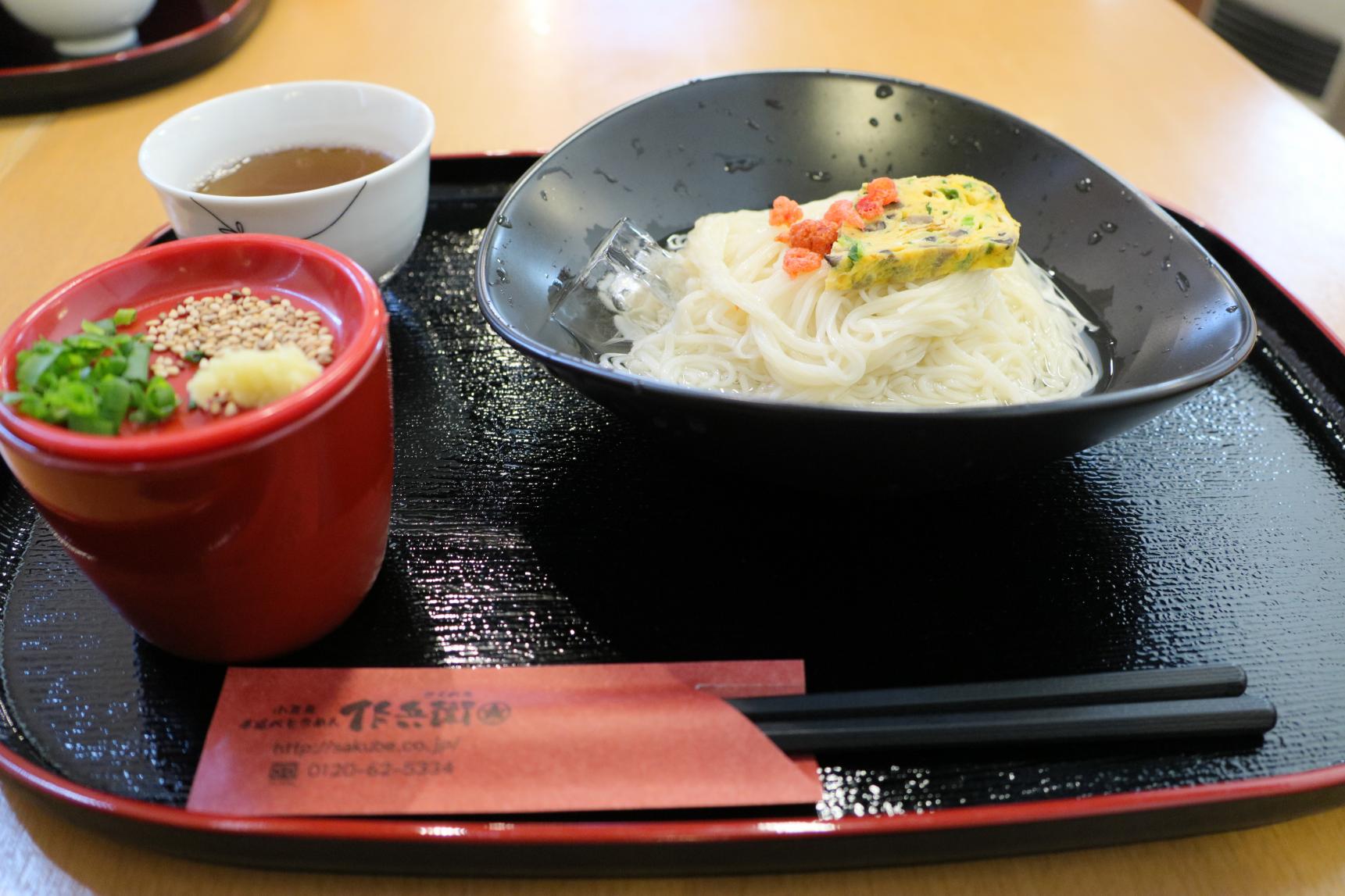 Where can I eat？

★★ Reservations recommended. There are many other restaurants on the island where you can enjoy somen noodles as well.

Olive farming in Japan has a relatively short history, but it is one in which Shodoshima figures prominently. The first recorded appearance of the fruit on the archipelago came in 1594, when a Christian missionary presented a cask of olives to the warlord Toyotomi Hideyoshi (1537–1598), the de facto ruler of Japan at the time. Growing olive trees on a large scale was attempted only three centuries later. In 1908, after Japan’s victory over Russia in the Russo-Japanese War (1904–1905), the two nations concluded a treaty that granted Japanese fishermen the right to operate along the Russian coast in the Sea of Okhotsk and the Bering Sea. At the time, olive oil was used as a preservative to keep fish caught in such remote waters from rotting during the journey back to port.

As the longer distances traveled by Japan’s fishing fleet created a sudden demand for such oil, the government initiated an olive-farming experiment in the three prefectures of Kagawa, Kagoshima, and Mie. Only Shodoshima in Kagawa, which has a relatively warm and dry climate similar to that on the shores of the Mediterranean Sea, passed the test. More farms were established, and the island gradually became known as the olive capital of Japan. Shodoshima currently produces about 90 percent of all olives grown in Japan. There are four main cultivars: Mission, which was the type originally planted in the early 1900s, Manzanillo, Lucca, and Nevadillo Blanco. Harvest season is from mid-September to November, after which most of the olives are either brined or pressed into oil. October 10 is “freshly pickled olive day,” when the first fruits of the season, preserved in brine for 10 days, go on sale. 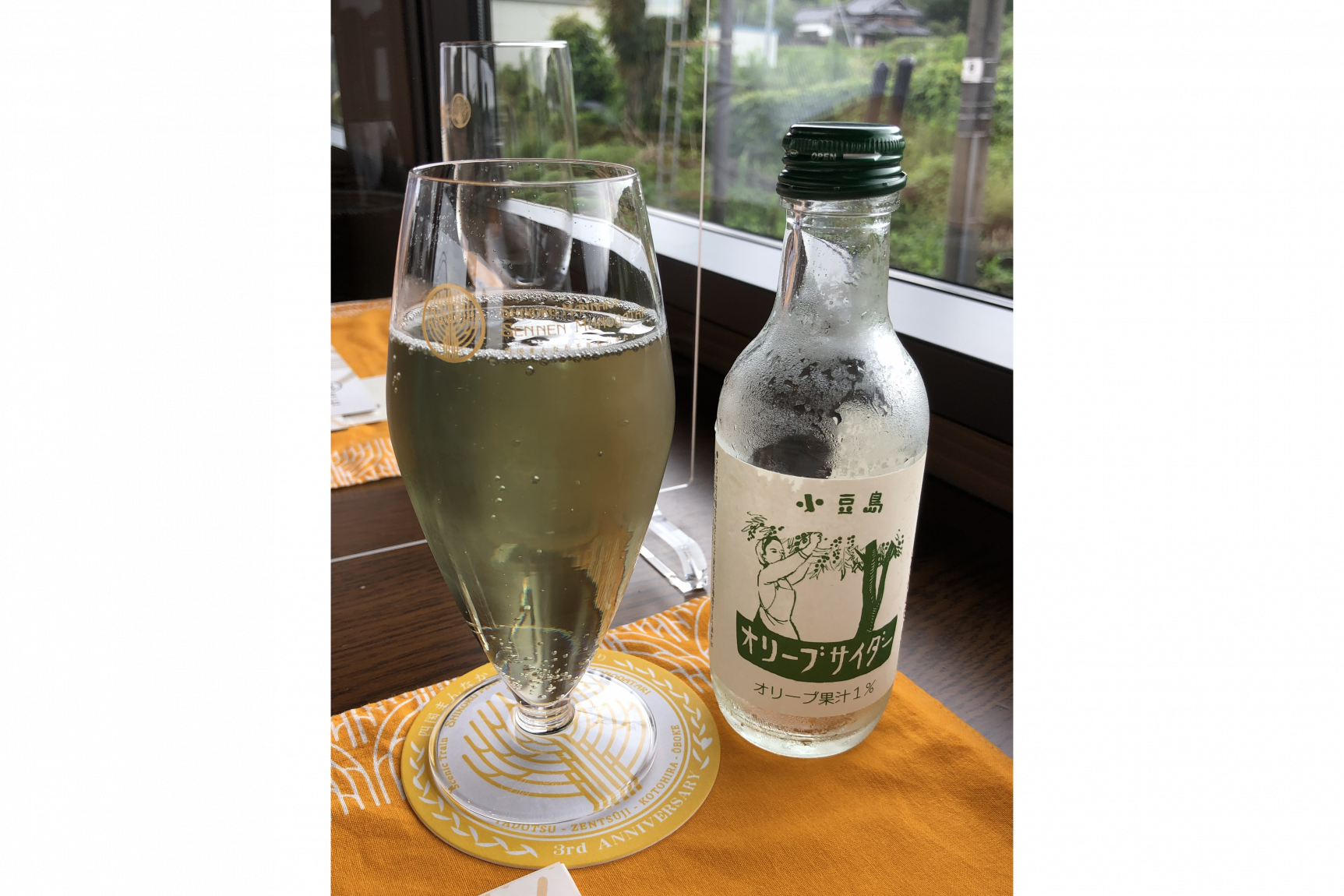 ・Olive Cider: You're sure to be surprised by the taste of this cider, bursting with the fresh flavor of green apples.
・Pickled Green Olives: These green olives are hand-picked one by one and lightly pickled with salt. Usually sold starting in October, these Pickled Green Olives are so popular they sometimes sell out during the winter season. If you're visiting Shodoshima at that time, be sure to give this seasonal favorite a try. Don't miss out, quantities are limited!
・Olive Hand Cream: Olives are not just for eating! You can find many cosmetic products made wide with olives on Shodoshima. Hand cream enriched with olive extract makes a great souvenir.