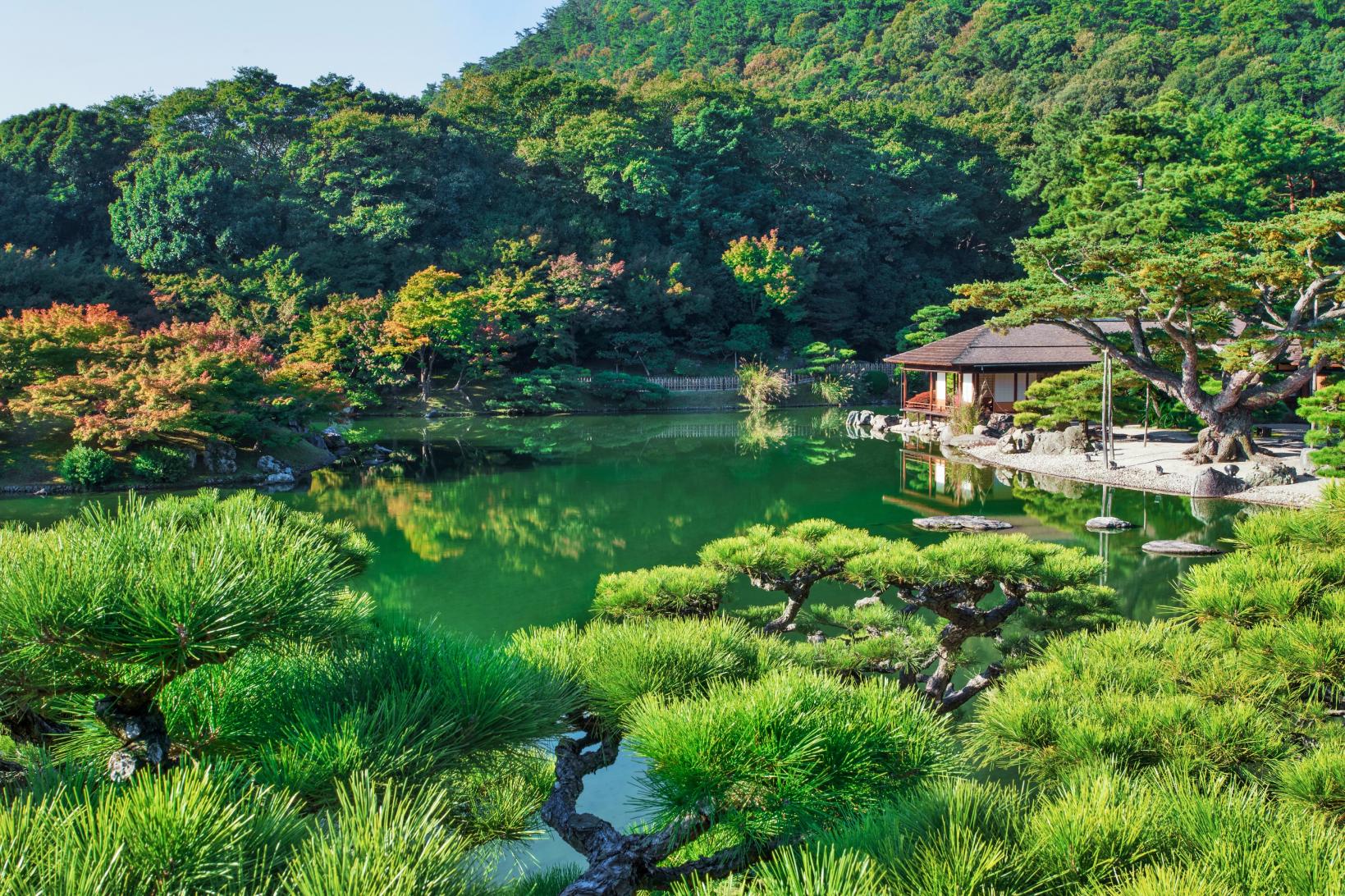 No visitor to Takamatsu should miss Ritsurin Garden. A historic landscape garden spanning more than 75 hectares in total, it is an oasis of greenery in the midst of the city, offering stunning views that incorporate structures dating back to the late seventeenth century. Besides strolling the grounds and admiring the scenery, you can sit down for a cup of matcha tea at the Kikugetsutei teahouse, view old tools and crafts at the on-site Sanuki Folk Craft Museum, and take a ride in one of the traditional wooden boats that circle the garden’s South Pond.

Ritsurin Garden was originally a part of the estate of the Matsudaira family, the lords of the Takamatsu domain, who inherited its site from the Ikoma family, rulers of Sanuki province (present-day Kagawa Prefecture). First constructed in 1642, the garden was maintained and enjoyed by the Matsudaira over more than 200 years until 1868. Following the Meiji Restoration of that year, the system of domains ruled by the shogunate (warrior-led government) was replaced with a Western-style centralized government and the Matsudaira lost their status as lords. Ritsurin Garden was turned into a park and opened to the public in 1875. A symbol of Takamatsu and one of the city’s most popular sights, Ritsurin is now recognized as one of the best-preserved Edo-period (1603–1867) gardens in Japan.

The garden was built in the kaiyu or stroll garden style, popular among high-ranking samurai during the Edo period, and features a series of carefully composed views that the visitor can admire in succession while walking through the garden. At Ritsurin, many of these views focus on a pond or small hill. The garden has approximately 1,400 pine trees, and artistically placed rocks dot the grounds. Another distinctive feature is the use of shakkei (“borrowed scenery”), a technique of garden design that takes advantage of natural features outside the garden to create a sense of expanse. At Ritsurin this background is provided by Mt. Shiun to the west, which appears to be towering over the garden when seen from certain angles. One such view can be taken in from Hiraiho Hill.

Ritsurin Garden consists of the original daimyo garden, or South Garden, and the North Garden, built in the Meiji era (1868–1912). It can take up to two hours to tour the vast grounds in their entirety, and visitors can enjoy different aspects of the scenery in every season. The cherry blossoms in spring and the red and yellow foliage in autumn in particular attract numerous visitors.

The Kikugetsutei Teahouse and the artificial Hiraiho Hill are two of the most scenic viewpoints in Ritsurin Garden.

The former is a thatched-roof structure that dates from the early 1600s and was used by the daimyo lords of the Takamatsu domain, who built the garden during the Edo period (1603–1867). This teahouse stands near the South Pond and is distinguished by its four facades, built so that it could be entered from all directions. From the tatami-mat floor of the Kikugetsu no Ma, the room closest to the pond, the view of the water from a certain angle creates an impression of floating on the surface.

In addition to offering carefully devised views in every direction, Kikugetsutei’s low ceiling and few walls make the teahouse a pleasantly cool place in summer. Its ground-level perspective contrasts with that of Hiraiho Hill, the highest point in the garden, on the east side of the South Pond. Shaped to resemble Mt. Fuji, it offers views over the pond, the arched Engetsukyo (“crescent moon”) Bridge, Kikugetsutei, and beyond, where Mt. Shiun looms up in the background. This vista is occasionally complemented by an old-style pleasure boat gliding across the pond.

As pine trees represent longevity in Japan, it is fitting that the 400-year-old Ritsurin Garden is abound with nearly 1,400 of them. Among the approximately 1,000 trees that are tended to regularly by the resident gardeners, several were planted by members of the imperial family and one by Edward VIII (1894–1972), former monarch of the United Kingdom, who visited the garden as crown prince in 1922.

More famous, however, are the “three great pines” of Ritsurin Garden: Tsurukamematsu, Hakomatsu, and Neagari Goyomatsu.
Tsurukamematsu (“crane and turtle pine”) is a Japanese black pine named after its shape, which is thought to resemble a crane standing on the back of a turtle—a mound shaped out of more than 100 stones. It is located near the Commerce and Industry Promotion Hall in the central part of the garden. South of the Tsurukamematsu stands the Hakomatsu (“box pine”), a row of interlinking trees that when seen together from a distance appear to form the shape of a long, thin box.
Last but not least is the Neagari Goyomatsu, which grows next to the Kikugetsutei teahouse. Approximately 8 meters tall, it was originally a bonsai tree presented to the daimyo lord of the Takamatsu domain in 1833 by Tokugawa Ienari (1773–1841), the head of the shogunate that ruled Japan until 1867. The daimyo had the pine taken out of its pot and planted in his garden, where it grew to an impressive size. It is the only Japanese white pine (goyomatsu) in Ritsurin Garden.

Things to Do in Ritsurin Garden

The grounds of Ritsurin Garden are so vast it could potentially take hours to explore the entire property on foot. For a less strenuous option, consider touring the grounds on a scenic boat ride. The garden features two wasen boats, similar to the traditional wooden rafts used to carry people across water in the Edo period (1603–1867). Spend an afternoon luxuriating like a seventeenth-century feudal lord as you float past Ritsurin Garden’s proudest features, including the Engetsukyo Bridge and Hiraiho Hill. The fare for the guided boat tour is ¥620 for adults and ¥310 for children. Tours run from 9 a.m. to 4 p.m. between November and January, and from 9 a.m. to 4:30 p.m. the rest of the year.

Apart from the boat tours, Ritsurin Garden also features the Kikugetsutei Teahouse and a folk craft museum, both of which offer enriching experiences out of the sun. At the teahouse, visitors can take part in a traditional tea ceremony accompanied by a wagashi dessert while gazing out at the pond and its koi carp swimming about. The Sanuki Folk Craft Museum displays local crafts including ceramics, lacquerware, and papier-mâché dolls, as well as a variety of folk tools that let visitors imagine the traditional lifestyles of the people of Kagawa.

The Four Seasons of Ritsurin Garden

Ritsurin Garden is abound with nearly 1,400 evergreen pine trees that define the garden’s landscape, but the wide variety of seasonal plants and flowers spread out throughout the premises means that visitors can look forward to slightly different views in each season.

The garden’s roughly 320 cherry trees come into full bloom between the end of March and the first week of April. There are several different species of the famous blossoms, including the Somei Yoshino and weeping cherry varieties and the Edo Higan, a wild cherry tree named after the spring equinox. During this time of the year, Ritsurin Garden hosts an illumination event where guests can view the blossoms in a different light after sundown.

Summer is when Ritsurin Garden is open the longest, opening at 5:30 a.m. and closing at 7 p.m. from June through August. The option of early access at the crack of dawn gives visitors the opportunity to admire the vividly colored flowers of the season, including irises, lotuses, and water lilies, while avoiding the midday heat.

Autumn, when the seasonal foliage glistens in vibrant shades of red, yellow, and orange, is an especially popular season to visit the garden. Even the garden’s pond appears different this time of year: the bright autumn leaves are reflected on the water, making for a famous sight already enjoyed by the daimyo lords of Takamatsu during the Edo period (1603–1867).

In winter, the garden is occasionally blanketed by a thin layer of snow. The snowfall creates a beautiful contrast with the bright winter blossoms such as camellias and plums, which reach their peak in February.