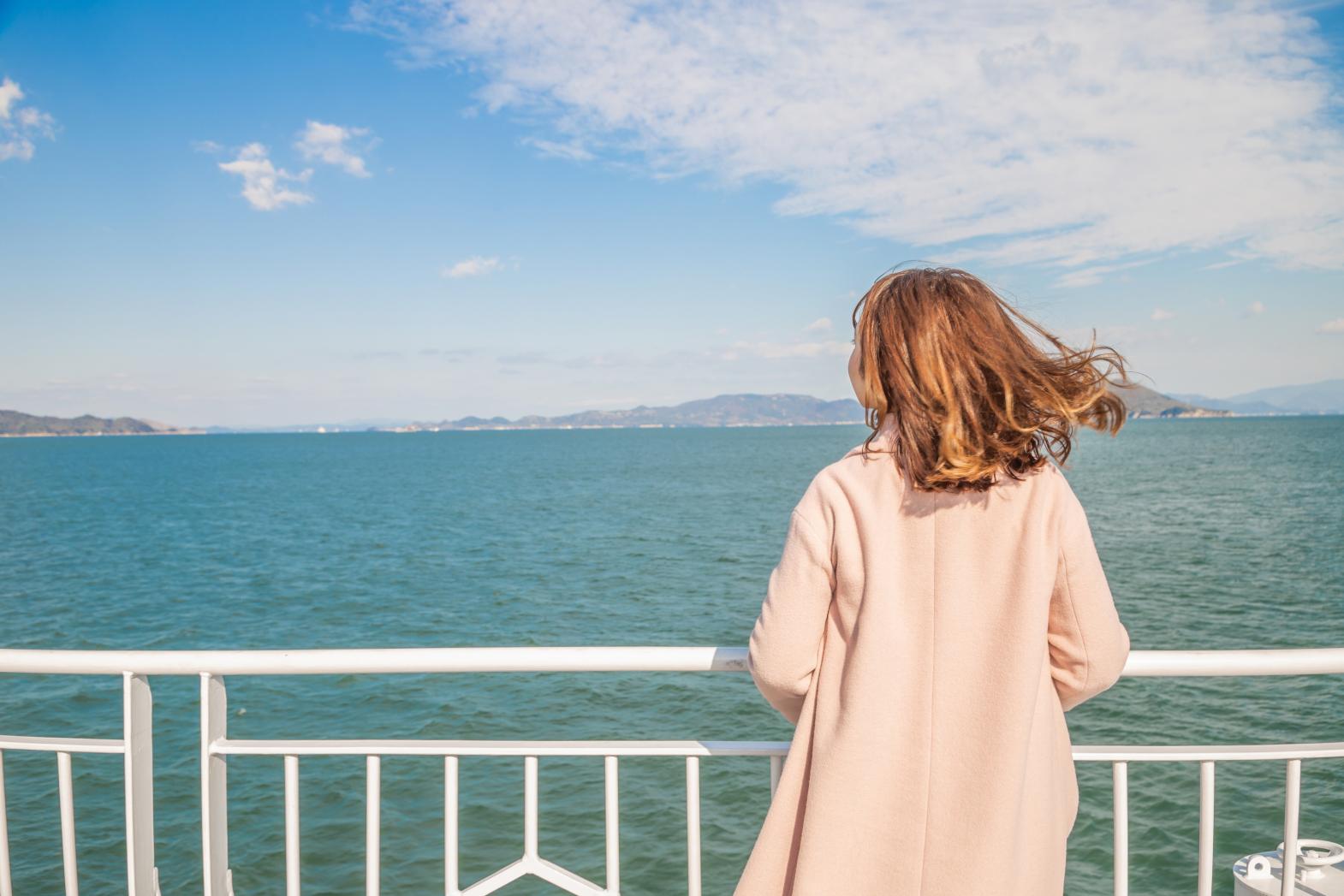 Discover the Islands of the Inland Sea

The Seto Inland Sea is dotted with roughly 3,000 islands, some of which are conveniently accessible by ferry from Shikoku and offer plenty to see and do for travelers looking to explore the culture, history, and flavors of the region. Among the most popular destinations are Shodoshima, the second-largest island in the Inland Sea that’s famed for its olive plantations, Naoshima, the “art island” that’s one of the main venues of the Setouchi Triennale art festival, and Honjima, where the traditional townscape speaks to the island’s history as a prosperous seafaring hub. Even closer to Takamatsu are the islets of Ogijima and Megijima, home to fortress-like villages and majestic seaside vistas.

Shodoshima is the second-largest island in the Seto Inland Sea and one of the region’s most popular destinations for travelers looking to explore the Inland Sea archipelago. The island is noted for its distinctive food culture, which reflects Shodoshima’s comparatively mild climate and its location near major shipping lanes. Traditional specialties include soy sauce and long, thin somen noodles, while olives are a more recent addition. Olive production on Shodoshima was initiated in the early 1900s and the island’s example has powered olive-growing throughout Kagawa Prefecture, which now produces about 90 percent of all olives grown in Japan. Olive plantations cover much of the island’s hillsides and, along with the sea beneath, make for a scenic landscape that is sometimes described as Mediterranean.

All things olive can be explored at Olive Park, where visitors can stroll along olive tree-lined paths, learn about the history of olives and the characteristics of Shodoshima olive oil, and sample seasonal, homemade cuisine. Another noteworthy spot showcasing the island’s agricultural traditions is Nakayama Senmaida, one of Japan’s most picturesque rice paddy terraces, where 700 to 800 rice fields are spread out along a lush hillside. In Shodoshima’s mountainous interior is the majestic Kankakei Gorge, which can be hiked or admired from a ropeway. Shodoshima is also one of the venues for the Setouchi Triennale international art festival, and its landscape is dotted with public art created for past editions of the festival.

The mountainous island of Ogijima in the Seto Inland Sea is some 8 kilometers north of Takamatsu port, from where it can be reached by ferry in about 40 minutes. When approaching Ogijima port near the southwestern tip of the island, visitors will notice how the islanders’ residences are built in layers along a steep, terraced hillside reinforced with stone walls. The houses face a wide variety of directions and often stand very close to each other, making the sloped, staircase-dotted streets between them appear labyrinthine. Some of these pathways afford impressive, if narrow, views of the sea below. Visitors should note that the hilly terrain can only be explored on foot and is unfortunately not suitable for individuals with mobility issues.

With a population of approximately 150, Ogijima was hardly a destination until 2010, when it was chosen as one of the venues for the Setouchi Triennale art festival. While the island is busiest in festival years, it also offers plenty to see at other times. The first permanent piece of art visitors come across after arrival is “Ogijima’s Soul,” a concrete-and-glass structure with a distinctively shaped white roof that dominates the port landscape. Created by the Spanish contemporary artist Jaume Plensa for the 2010 Setouchi Triennale, the building was inspired by the shape of a seashell and is now a place for visitors to rest their legs and purchase ferry tickets.
Active visitors can walk 30 minutes from the port to the northern part of the island. Here, the most popular attraction is the Ogijima Lighthouse, a Western-style beacon tower built in 1895. Next to the unpainted granite structure is a small museum.

The island of Megijima is located about 4 kilometers north of Takamatsu port, from where it can be reached in 20 minutes by ferry. The convenient location makes Megijima an ideal point of entry for visitors looking to explore the islands of the Seto Inland Sea.
Megijima styles itself the “island of ogres” in reference to a popular Japanese folk tale about the adventures of Momotaro, Peach Boy. The young protagonist travels to a distant island, Onigashima, to battle a band of ogres (oni) together with his companions, a dog, monkey, and pheasant. Momotaro and his friends defeat the ogres and retrieve a treasure from their lair, returning home as heroes. According to local legend, the Onigashima caves on Megijima, which are hundreds of meters deep and are thought to have been dug into the cliff by the island’s ancient residents, were once inhabited by ogres. This theme appears in several place names on the island, including Onigashima Beach, a popular summertime getaway for Takamatsu residents that provides views toward that city and the flat-topped mountain of Yashima.

Unrelated to the ogre legend but still worth a visit is the Washigamine scenic lookout, located on the top of a mountain 188 meters above sea level and affording 360-degree views of the Seto Inland Sea. Reachable on foot in about 10 minutes from the Onigashima caves, this vantage point is particularly popular in spring, when some 3,000 cherry blossom trees on Megijima paint the island in shades of pink. Another noted flower-viewing spot is the promenade that connects the port of Megijima with the island’s lighthouse.
Viewable year round are the massive stone walls that protect houses on Megijima from the wind, which often blows hard from the northwest across the island in winter. Some of these structures are higher than the homes they shield from the elements, and together with the narrow streets that snake between them make the populated parts of Megijima feel somewhat like a medieval fortress.

Honjima: A Hub of Maritime History

The island of Honjima is located in the Seto Inland Sea off the coast of Kagawa Prefecture, west of the Seto Ohashi Bridge, and can be reached in 35 minutes by ferry from the city of Marugame. Honjima is the second-largest of the 28 Shiwaku islands and the most populous, though only about 400 people live on it. The island has an illustrious history, having been a prosperous seafaring center from the sixteenth to the eighteenth century.

This history is on display in the port town of Kasashima, in the eastern part of Honjima, where some 100 buildings constructed mainly between the beginning of the nineteenth century and the early twentieth century survive. Surrounded by hills on three sides, the town occupies the base of a narrow valley and is laid out in a grid pattern. Its passageways are lined with traditional merchant family homes, some modest, others the grand estates of households whose members built their fortunes in shipbuilding and carpentry. Kasashima is designated a Preservation District for Groups of Traditional Buildings. Three of these buildings are open to the public, including the Sanagi House, a merchant’s home that dates to the latter half of the Edo period (1603–1867). The house includes a facility where visitors can learn about the history and preservation of the town. Its distinctive exterior walls are decorated with namako, a diamond pattern achieved with thick white plaster joints laid over black tiles, originally developed to protect earthen walls from water.

The Kasashima townscape can be viewed from above by climbing 15 minutes from the bottom of the valley to the summit of the 110-meter Mt. Tomiyama. Here, a scenic view spot affords vistas over the settlement and toward the island-dotted sea. The entire length of the Seto Ohashi Bridge is also visible from this point.

The Shiwaku archipelago is a chain of 28 small islands in the Bisan-Seto Strait between Okayama Prefecture on the main island of Honshu and Kagawa Prefecture on Shikoku. Though most of the islands are uninhabited, the larger ones including Honjima, Hiroshima, Yoshima, and Ushijima host a number of historical and cultural sites. The Shiwakus have been vital for trade and maritime traffic since ancient times. They provided protection from the often-perilous currents of the Bisan-Seto Strait, and supported a community of seafarers and shipbuilders who made a name for themselves throughout the Inland Sea region and beyond. The mariners came to be known as the Shiwaku Navy, while their artisan counterparts were called the Shiwaku Carpenters. Today, these professions have all but disappeared locally, and the decreasing population of the islands is aging. New hope, however, is provided by tourism: several of the islands now co-host the Setouchi Triennale international art festival, which attracts visitors from around the world to the region every three years.